Macro-Average: Rare Types Are Important Too

Collaborators: Weiqiu You, Constantine Lignos, and Jonathan May

We explore the simple type-based classifier metric, MacroF1, and study its applicability to MT evaluation. We find that MacroF1 is competitive on direct assessment, and outperforms others in indicating downstream cross-lingual information retrieval task performance. Further, we show that MacroF1 can be used to effectively compare supervised and unsupervised neural machine translation, and reveal significant qualitative differences in the methods' outputs.

In the previous work, we framed NMT as a multi-class classifier. In this work, we evaluate NMT (or MT, NLG in general) as if it is a multi-class classifier. The overall performance of a multi-class classifier is commonly obtained by taking an average of individual class performances. Two common ways to compute averages are Micro- and Macro- averages. In many tasks used by academia, test set classes are often balanced, and in those scenarios micro and macro are essentially equivalent. However, if the test set classes are imbalanced, which is likely the case in real-world, micro and macro averages make a huge difference depending on the degree of imbalance.

In NLP/linguistic terms, micro average assigns equal weight to each token (or instance), whereas macro-average assigns equal weight to each type (or class). Since the types in natural language datasets resemble Zipfian distribution, an extremely imbalanced distribution, reporting micro-averaged performance would be misleading, especially because minority classes (i.e rare types) are equally or more important than majority classes (aka stop words). 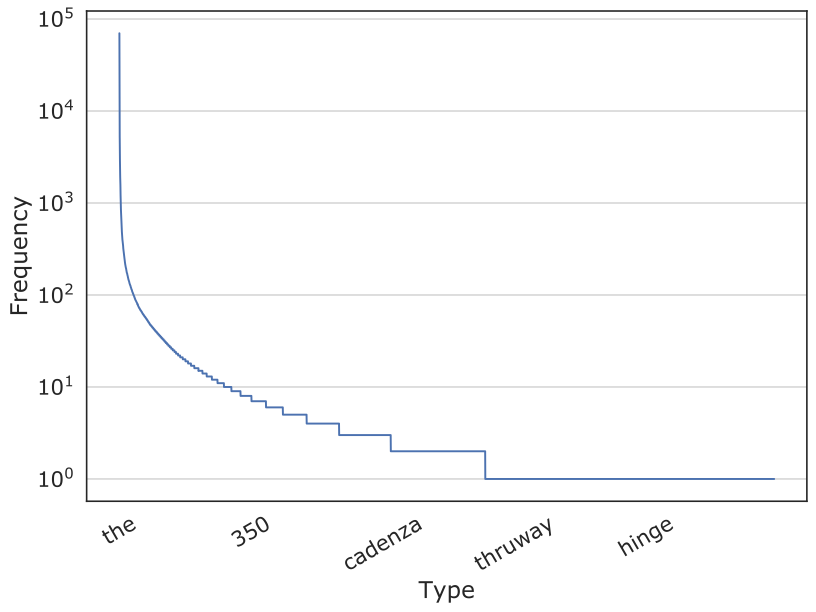 Figure 1. Type frequencies as seen on Brown Coprus show an exteme imbalance. A few types dominate the corpus where as a vast number of types are infrequent

Do we really need one more MT evaluation metric? What is wrong with the current metrics that needs to be addressed? BLEU[1], ChrF[2], and such model-free metrics that are in use today are micro-averaged metrics — they treat each token equally. As a result, they provide higher rewards for learning stopword types like if, and, and but, and significantly less reward for learning to generate content words like xylophone, peripatetic, and defenestrate. In other words, when we measure using micro-averaged metrics the improvements in translating content words better than baselines, we see the delta compared to baseline is so tiny; we tend to believe that the improvements are not significant. And we risk in discarding good ideas because the micro-averaged metrics marginalize rare types. 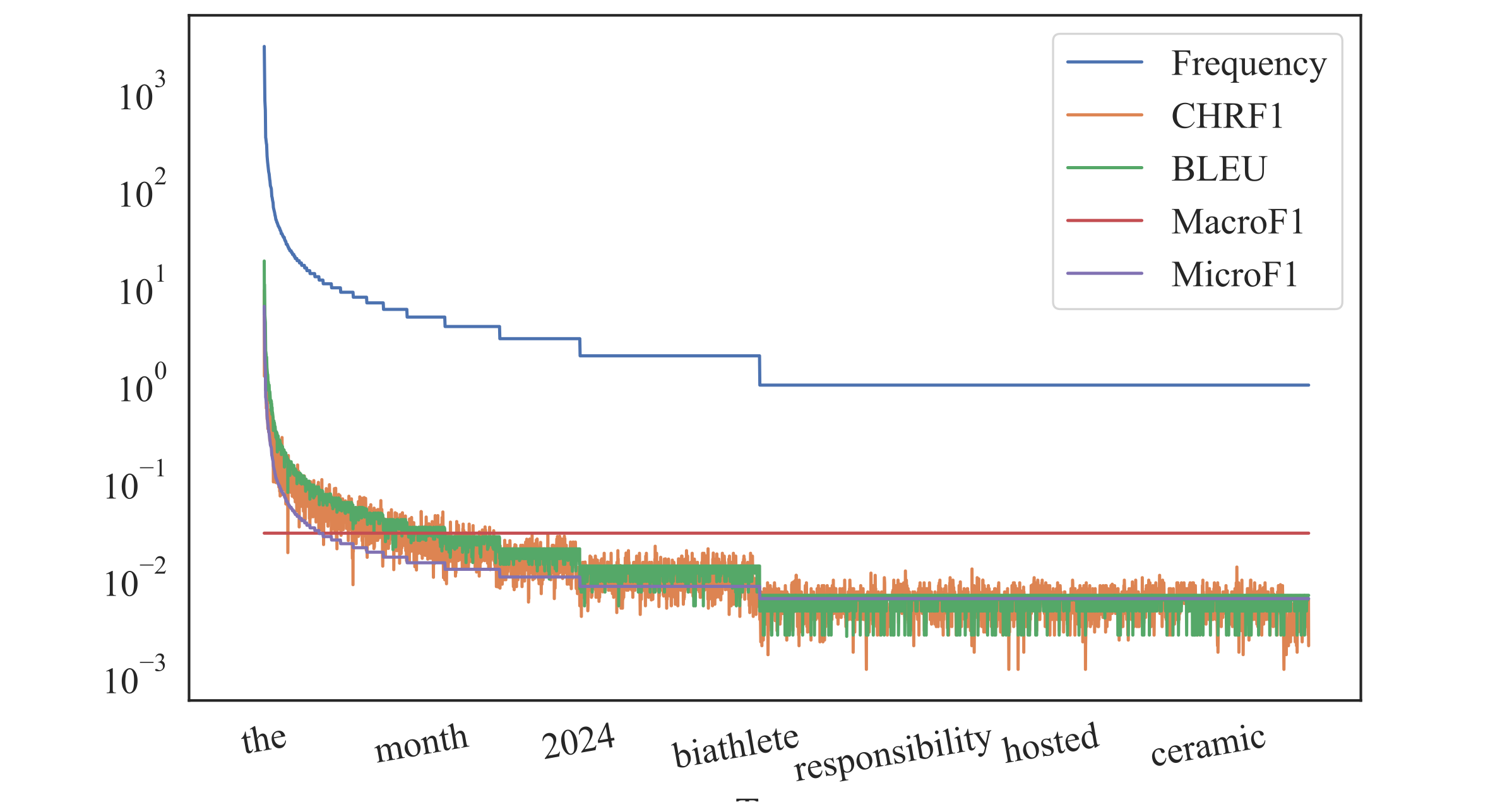 But in reality, these low frequency content types carry a lot of information (isnt it why they called content words?). Information theory also agrees with this statement 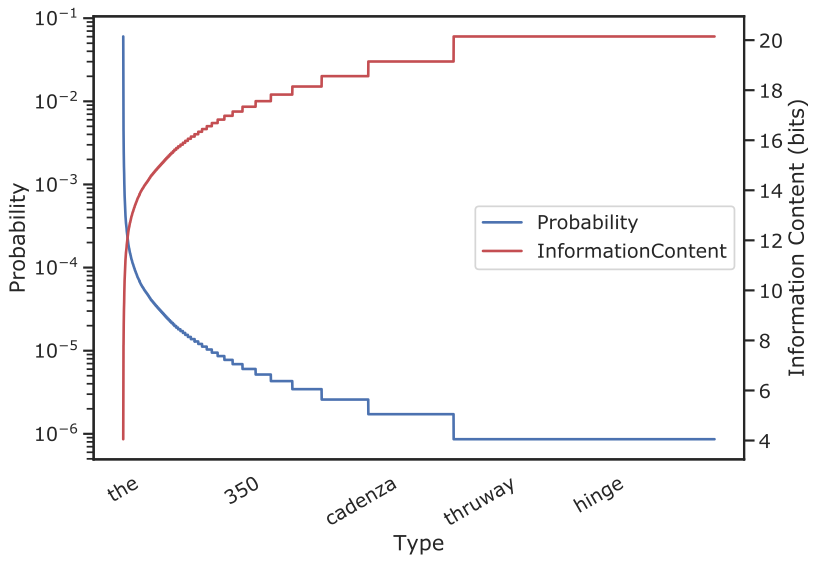 On the other hand, a lot of model-based evaluation metrics have been proposed lately. These high performance models are opaque, expensive, and biased in several undesirable ways. For example, we looked into BLEURT[3], one of the best model-based metrics at the time of writing, and it showed preferences on certain names in an undesirable ways. In addition, the scores are not really interpretable.

Will a simple metric like MacroF1 be competitive for MT evaluation? We have been very skeptical too. So we’ve tested it thoroughly on several tasks, which are as follows:

Figure 4. On WebNLG dataset, MacroF1 is found to be a poor indicator of Fluency and Grammar, but a strong indicator of Semantics.

WMT Metrics[5] datasets have human judgements for tens of languages. Here MacroF1 rarely scored the best correlations in 2017. It got better in 2018. And, it scored the highest number of wins per metric in 2019. This trend is interesting; especially if you wonder how a metric that is a poor indicator of fluency and grammar (as seen on our findings on WebNLG datasets) can get such good results on the most recent WMT Metrics Task? We believe NMT models have made great progress in the recent years. The latest models can produce very fluent translations. Now we are in the era where semantics is a key discriminating factor. MacroF1 can capture adequacy better than alternatives.

We also tested MT metrics on downstream task of cross-lingual information retrieval (CLIR). This task focused more adequacy and less on fluency. We used CLSSTS 2020 datasets[6] for Lithuanian-English, Pashto-English, and Bulgarian-English and mesaured the IR performance using mean average precision (mAP). This is an IR task in which queries are in English but documents are in foreign languages. MacroF1 found to be the strongest indicator of IR task performance.

Figure 7. Even though SNMT and UNMT achieve comparable BLEU scores, they differ significantly in terms of MacroF1.

As an added bonus, MacroF1 score can be broken down into individual type/class F1 scores. We looked at how the performance varies across all the types in vocabulary. On high frequency types, UNMT models are relatively better (i.e. better F1 score) than SNMT, which results in fluent outputs, hence good BLEU scores, but UNMT is relatively poorer in translating low frequency types, hence lower MacroF1 than SNMT. 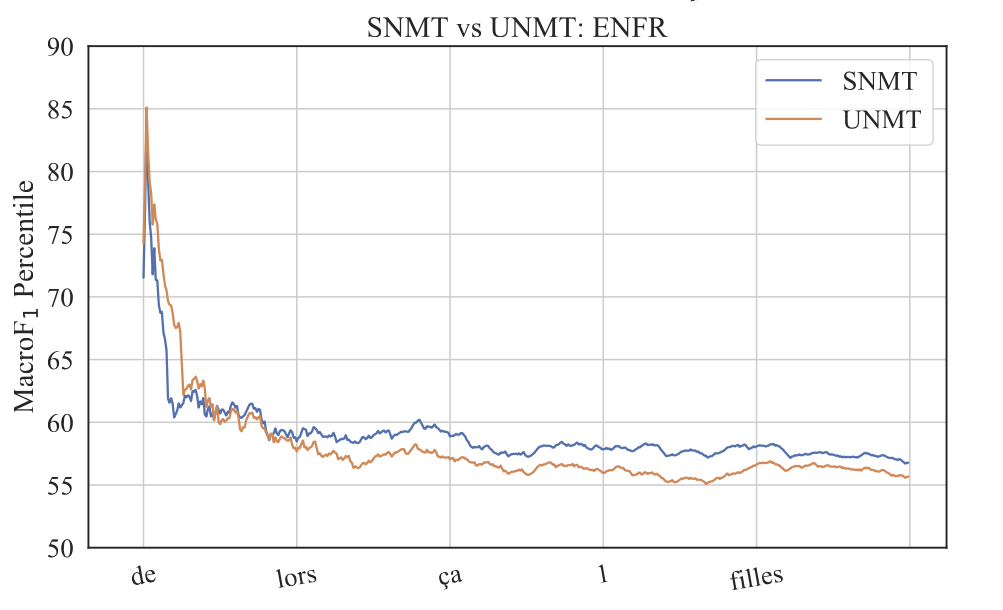 Figure 8. SNMT vs UNMT MacroF1 on the most frequent 500 types on EN-FR test set. UNMT outperforms SNMT on frequent types, howver, SNMT is generally better than UNMT on rare types. This trend is similar on the other languages we tested: FR-EN, EN-DE, DE-EN, EN-RO, and RO-EN.

To learn more about this work, please refer to our paper. Send any questions to tg(at)isi.edu.

Thanks to Shantanu Agarwal, Joel Barry, and Scott Miller for their help with CLSSTS CLIR experiments, and Daniel Cohen for the valuable discussions on IR evaluation metrics.